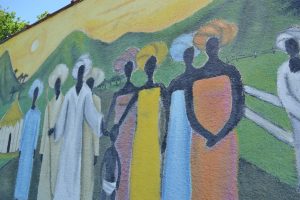 February is a month set aside to pay particular attention to an often-overlooked piece of American history. During this month, we spend time intentionally seeking out and honoring the history of African Americans whose stories are largely left out of text books. There are so many outstanding stories to share and remember, not only during Black History Month, but throughout the year.

NeighborWorks Waco has a history of partnering with local artists to bring back the vibrancy of that was once a hallmark of the East Waco community. Through numerous strategic partnerships, we have been privileged to play a role in several of the murals that adorn the Elm Avenue corridor.

“It takes a village” was completed in 2004. The idea was inspired by an African Proverb that is attributed to the adages in the Lunyoto, Kihaya, Kijita and Swahili cultures. Each language roughly translates to an idiom many of us have heard and used: “It takes a village to raise a child”. This proverb speaks not only to the value placed upon the local community and comradery for which many African cultures are renown, but also to the challenges of parenting.

Predominately and historically a thriving community of African Americans, East Waco embodies the sentiment emphasizing community and neighborliness, and NeighborWorks Waco was honored to help celebrate these outstanding attributes of a community we love. In fact, several other murals in the East Waco area come from partnerships including NeighborWorks Waco. Check out our Facebook page this month to learn the history behind several other iconic pieces of Waco’s public art!