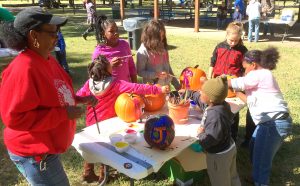 If you have found yourself driving around East Waco lately, you may have noticed quite a few changes going on! One change that we at NeighborWorks Waco are especially excited to announce is the renaming of East Waco Park, now known as the Wilbert Austin, Sr. Park.

Hood Street, across from our new Legacy Square subdivision,” said Roy Nash, President and CEO of NeighborWorks Waco, “was a park that then City Councilman Austin really gave every effort to see that it could be used by neighborhood families. We saw first-hand his dedication to his community through his untiring efforts to assist families in every way possible. And of course, he was a dedicated volunteer in all of NeighborWorks Waco’s activities in East Waco.”

The renaming comes in the midst of many renovations being done at the park through federal Community Development Block Grant funds. The park is getting upgraded sport court surfaces, new and improved lighting, as well as fencing around the perimeter of the area in efforts to make the Wilbert Austin, Sr. Park a safer, more utilized space for community residents!