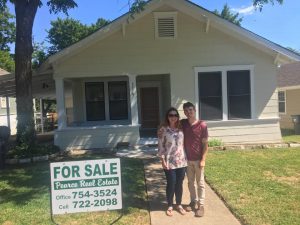 Waco, TX – April 2, 2018 – Imagine being a newly married couple faced with the task of moving – not just down the street, a few states over, or on the other side of the country – but to a new country, one where you know no one. This is the same challenge Annie and Matt Hepp faced when a job opportunity moved them from Vancouver, Canada to Waco, Texas.

Annie and Matt met at Simon Fraser University in Canada. After graduation and shortly after getting married, a job opening at Texas Parks and Wildlife brought them and their two dogs to a foreign land called Texas –  Waco to be exact.

Being accustomed to the incredibly expensive housing market in Vancouver, Annie and Matt never saw homeownership as a possibility for them. The average home in Vancouver costs over 1 million dollars, leaving over half the city to waste their money on rent. However, after a friend from Texas introduced Annie and Matt to NeighborWorks Waco, they quickly realized homeownership would be achievable in Waco.

The Hepps were credit-worthy and payments would be affordable for them, but they lacked the necessary funds for the down payment. With NeighborWorks Waco down payment assistance, though, their newfound dream became a reality. “NeighborWorks [Waco] genuinely cares about helping people and took the time to explain everything,” says Annie. “Buying your first home is really overwhelming, but NeighborWorks [Waco] helped us feel confident and comfortable with our decision.” The organization helped Annie and Matt through all of the obstacles that come with being a first-time homebuyer – from researching realtors and lenders to signing the mounds of paperwork at closing to filing their homestead exemption – and everything in between.

“NeighborWorks [Waco]’s staff provided incredible care and consideration beyond anything we ever expected,” said Annie. “They spent so much time before, during, and even after the home purchase making sure we understood each step.” The couple still seek advice from the NeighborWorks Waco team, who continues to help them through the any homeowner obstacles they encounter. Annie and Matt said that if it weren’t for the incredible staff at NeighborWorks Waco, they would still be throwing away their money on rent and not earning equity obtained through homeownership. Annie cannot believe that they own their own home. She says it feels so good to come home at the end of the day and think ,“this is OUR home.”

*We’d like to offer a special thank you to our Baylor University marketing students that researched and wrote this article!*